NeuroVision is developing numerous fluid biomarkers for the field of neurology. Many markers of neurodegeneration are present in the blood. Proteins such as amyloid beta (Aβ), tau, neurofilament-light (NfL), alpha-Synuclein, glial fibrillary acidic protein (GFAP) and others that represent abnormal pathology, synaptic dysfunction, inflammation, and blood-brain barrier regulation are available for measurement in plasma using highly accurate assays.  NeuroVision is developing a family of neurodegenerative assays that when used singly or together in various multiplex combinations can help doctors assess a patient’s condition more accurately or more cost effectively than methods currently available. 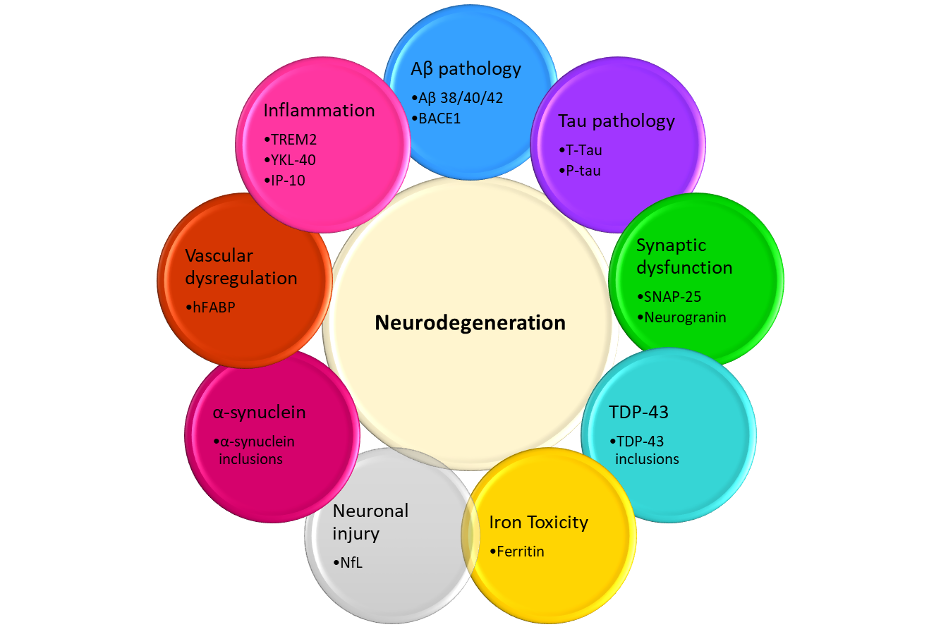 Amyloid beta.  Amyloid-β (Aβ) plaques are the characteristic AD pathology first identified by Dr. Alzheimer in the brains of deceased demented patients over a century ago.  Alzheimer’s can only be confirmed after death by the significant presence of Aβ plaques in the brain10, but identification of patients on the AD continuum requires in vivo or in vitro biomarkers to detect Aβ either in the brain, cerebral spinal fluid, blood, or other organs that can act as a surrogate for true amyloid positivity.  Cleavage of the amyloid precursor protein (APP) results in production of amyloid peptides with a range of residues from 17 to 43, although the peptides of most interest are Aβ42 and Aβ40.11

Tau protein.  The other hallmark of Alzheimer’s is the presence of tau tangles in the brain.  Tau tangles result from the breakdown of axonal microtubules, releasing tau protein and resulting in axonal death. Hyperphosphorylated tau increases its likelihood to create fibrils, which leads to microtubule destabilization, axon failure, and eventual neuronal failure.12

Neurofilaments.  Essential for axonal growth, structural support and the transmission of electrical impulses.  Increased levels of the light filament variant are seen in various neurodegenerative diseases and brain injuries, correlating with cognitive impairment and neuronal loss.14

Transactive response DNA-binding protein 43 (TDP-43).  TDP-43 contributes to neuroinflammation and may have a role in mitochondrial and neural dysfunction.  It is characteristic of frontotemporal lobar degeneration (FTLD) and sporadic amyotrophic lateral sclerosis (ALS).11